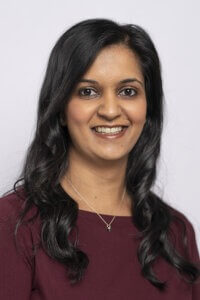 Sweta leads the in-house legal team, which provides legal counsel and expertise to all departments within Lendmark. Her 10 years’ experience and comprehensive understanding of consumer finance legal and regulatory requirements and corporate legal strategies allow her to contribute as an integral resource for strategic projects, including the Lendmark customer portal and mobile app, Electronic Signature (E-Sign) software, and an internal systems conversion project that changed the company’s origination platform.

Prior to joining Lendmark, Sweta worked as an Associate at a large consumer bankruptcy practice and as an Assistant General Counsel for the Georgia Department of Insurance, which also regulated Georgia’s small loan industry during her time with the Department.

She is a member of the American Bar Association and serves on the ABA’s Consumer Financial Services Committee. Sweta earned her Juris Doctor from Georgia State University, College of Law, and her Bachelor of Science in Behavioral Neuroscience from the University of British Columbia.